One of the easiest ways to get more business through the door is probably also one of the most overlooked and ignored.  Think about this – if a client refers us to one of his associates or friends, we have a much higher probability of making a sale and…

doing business with that referral than if we had no introduction.  In fact, it is up to 10 times easier to sell to a referral than to a cold call.  So why don’t we do it more? Well most business owners tend to either forget about this simple technique, or they aren’t really sure how to approach it as a lead generation strategy.  Let’s take a look at this in greater detail then:

How do you get a large number of qualified referrals? Most people do not volunteer referrals, so the key is to ask for them correctly.

Here is a 3-step method that has worked well for me:

1. Thank the client for his time.

“Mr. Smith, thank you for your time today. I look forward to talking with you again soon.”

Saying “thank you” is not only common courtesy, it makes people feel good.

“Before I go, I wonder if you could help me?”

This is a very low key and friendly approach. Most of us don’t mind doing small favours for people if they ask politely and it doesn’t take a lot of our time.

“Do you know anyone else who could be interested in this particular product or service?”

This question can be answered “yes” or “no” – and it’s often easier for the person to pick “no.”

Think of the number of times you have walked into a retail shop and have been asked, “Can I help you?” only to reply, “No thanks, just looking” … without even thinking!

A much more effective way to ask for referrals is to start your question with the word “who.”

“Who are two or three people you know who may be interested in this product or service?” Followed with “Who would you suggest I talk with?”

When you start a question with the word “who,” it is very difficult to get a yes/no answer.

Another tip: Give the person you are talking to the choice of giving you two or three names – not one or two. When given a choice, it’s surprising how often people will go with the lower number you give them.

Here’s a bit of research that was carried out regarding referrals by a sales trainer:

When I was selling sales training programs a few years ago, I used to ask for only “one or two” referrals.

“Who are one or two people you know who may be interested in looking at some ideas to increase sales?”

This referral system was measured by asking 100 people I spoke with these questions. Some gave me one referral, some two and some gave none. This resulted in around 100 referrals (roughly one referral per person) and was the lower number of the two choices I gave them (one or two).

A while later, the same survey was carried out to another 100 people, but this time, instead of asking for one or two referrals, I asked for two or three.

i.e. “Who are two or three people you know who may be interested in looking at some ideas to increase sales?”

This time, a radically different result!. Roughly 200 referrals (an average of two referrals from each person I asked). Again, some gave none or one – but this time some also gave two or three or more. The average worked out at two per person, or the lower number of the two choices I gave them (two or three).

Time for you to take some proactive action:

Try this small test for yourself.  For one month, ask everybody you speak with the same referral questions – but increase the numbers (try changing the numbers to two or three)

“Who are the two or three xxxxxxxxxxx you know who may be interested in looking at some ideas to xxxxxxxxxxx? Who would you suggest I talk with?”

One more thing to keep in mind about asking for referrals: You do not know who the person you are talking to could potentially refer you to. Plus, you can often get referrals from people who never buy from you themselves.

Referrals are a wonderful way to increase your sales – and yet most businesses just don’t use this effectively until we implement this strategy effectively.  Many people make marketing their business very complicated (and expensive!).  Time and time again it’s about implementing the simplest ‘low cost- no cost’ strategies to gain new customers.  All that is needed is investing time and focus.  Plus of course practice at asking for those referrals!

Business Awards Finalists
How To Improve Your Presentation Skills

This site uses Akismet to reduce spam. Learn how your comment data is processed. 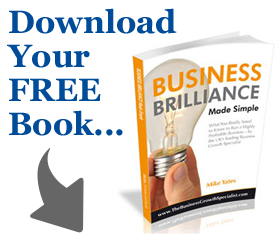 Please enter your details below to claim instant access.

By filling in the form above you agree to receive emails from me. You can unsubscribe at any time. I will never share your details with any third parties. I dislike spam as much as you do.

This website uses cookies to improve your experience while you navigate through the website. Out of these, the cookies that are categorized as necessary are stored on your browser as they are essential for the working of basic functionalities of the website. We also use third-party cookies that help us analyze and understand how you use this website. These cookies will be stored in your browser only with your consent. You also have the option to opt-out of these cookies. But opting out of some of these cookies may affect your browsing experience.
Necessary Always Enabled

Any cookies that may not be particularly necessary for the website to function and is used specifically to collect user personal data via analytics, ads, other embedded contents are termed as non-necessary cookies. It is mandatory to procure user consent prior to running these cookies on your website.